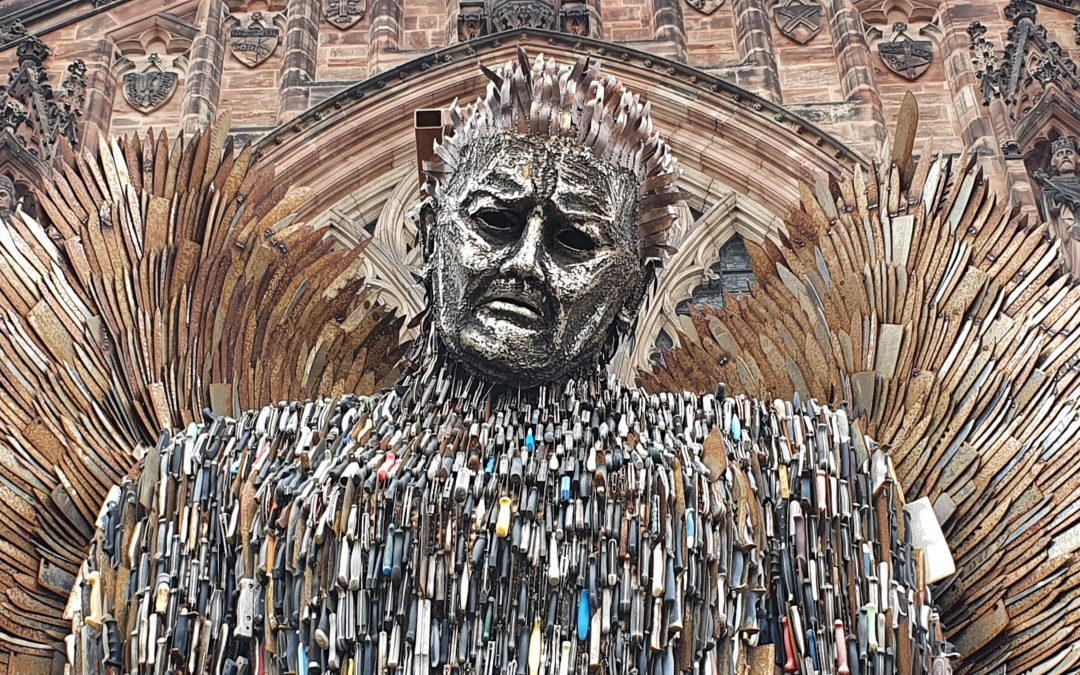 A 27ft tall Knife Angel, a breathtaking sculpture made of 100,000 knives confiscated knives received from 43 Police Forces across the UK, was a sight to behold in Hereford for me.

I had heard that the Knife Angel was visiting Hereford, it has been touring the UK since December 2018 and for me I was compelled to take a look and see this metallic beauty for myself and I wasn’t disappointed, in fact I was deeply moved by the huge presence in front of Hereford Cathedral.

Standing beneath this 27ft tall, 3.5tonne sculpture of an angel, I couldn’t help but feel small.

The knives and all they represent, the lives they may have altered, changed, or at worst stolen….so many thoughts, for this thing of beauty towering above me.

Standing in front of the magnificent Hereford Cathedral, the angel seems to watch and send a silent message, a plea, which is eerily captivating.

As your eyes tune into the finer details of the sculpture, you begin to notice the number of individual knives and blades.  The different sizes, coloured handles, styles, finer details and the sheer number of weapons is positively mindblowing.

His wings are made of multiple blades, the rust just adding to the overall effect of the statue. With his dark eyes and magnificent hands, you can’t help feeling entranced.

I couldn’t help then wondering about the story behind the knives …. where they have been used, for what purpose, and then noticing a small amount of relief that they were handed in and now they are educating and wowing people everywhere.

Where did he come from?

The knives have been collected from Police force amnesties held across the country.  The amnesties were held to highlight, grab attention and bring the issue of knife crime to the front of society’s consciousness.

The Knife Angel idea came from a customer’s comment at The British Ironwork Centre which is a family-run business based in Oswestry following their Uri Geller spoon gorilla project. The team along with artist Alfie Bradley created a plan and following approval for the project from the Home Office the project “Save a Life, Surrender Your Knife” was born.

You can read the full Knife Angel story here.

The National Anti-Violence Tour is taking the knife angel around the UK and could be coming to a city near you – you can find out where he has been and where he is going here.

Knife Angel bought back memories for me

When I was a small child I witnessed a knife crime.  I was walking with my mother outside a public house and a fight was taking place, one of the men, pulled out a knife.  My mother quickly ushered us away.  I have no idea of the outcome of the fight or even if the knife was used but at the tender age of around 5 years old, It impacted my thoughts and scared me.  Even at that young age, I knew what it meant and I often relived that scary moment.

As an adult, I have been able to process that memory using my NLP tools and techniques. It doesn’t remove the memory, it removes the emotions involved with that moment and allows me to think back without an emotional trigger happening within me.  I do wonder if perhaps that experience was part of laying foundations of helping people with my coaching and holistic therapy.

As a child, I was confused, as to why the men wanted to hurt each other.  As an adult I understand alcohol-fulled fights, I don’t understand the need to carry a weapon and potentially stab or kill another human being.  I am not sure, I will ever feel comfortable with knife crime.

What I do know, is that this Knife Angel can only be a good thing.  Educating and potentially helping to reduce the number of knives on our streets, let’s hope it continues.

Get In Touch Today

Colita Dainton The Success Coach at Litabix.com. Helping people think differently about their problems. If you are interested in working with me, use the contact form or book a free 30-minute discovery call,it would be great to hear from you.

Success is always the order of the day!

This website uses cookies to improve your experience while you navigate through the website. Out of these cookies, the cookies that are categorized as necessary are stored on your browser as they are essential for the working of basic functionalities of the website. We also use third-party cookies that help us analyze and understand how you use this website. These cookies will be stored in your browser only with your consent. You also have the option to opt-out of these cookies. But opting out of some of these cookies may have an effect on your browsing experience.
Necessary Always Enabled
Necessary cookies are absolutely essential for the website to function properly. This category only includes cookies that ensures basic functionalities and security features of the website. These cookies do not store any personal information.
Non-necessary
Any cookies that may not be particularly necessary for the website to function and is used specifically to collect user personal data via analytics, ads, other embedded contents are termed as non-necessary cookies. It is mandatory to procure user consent prior to running these cookies on your website.
SAVE & ACCEPT